(put on the costume)

Ridi Pagliaccio (Laugh Clown), original: “Vesti la giubba” (“Put on the costume” or “On With the Motley”, from the original 1893 translation by Frederic Edward Weatherly) is a famous tenor-aria from Ruggero Leoncavallo’s 1892 opera Pagliacci (Clowns).

Ridi Pagliaccio (Laugh clown – Vesti la giubba) is sung at the conclusion of the first act, when Canio discovers his wife’s infidelity, but must nevertheless prepare for his performance as Pagliaccio the clown because “the show must go on“.

The aria is often regarded as one of the most moving in the operatic repertoire of the time. The pain of Canio is portrayed in the aria and exemplifies the entire notion of the “tragic clown“; smiling on the outside but crying on the inside.

Enrico Caruso‘s recordings of the aria, from 1902, 1904 and 1909, were among the top selling records of the 78-rpm era and reached over a million sales (from: Wikipedia).

At this link you will find the text of the aria “Vesti la giubba”, “Put on the costume” (or Ridi Pagliaccio, Laugh clown) in the original Italian language.

In the menu at the top or at the side you can find the text: “laugh clown” (Ridi Pagliaccio) by Ruggero Leoncavallo translated in other languages: French, Italian, German, Spanish, Chinese and other.

Below are some videos of the aria “Vesti la giubba” (or Ridi Pagliaccio) sung by Luciano Pavarotti during the performance of the opera “Pagliacci” by Ruggero Leoncavallo.

Enjoy the reading and good listening.

(Text taken from the libretto of the opera “Pagliacci”

and translated into English).

Act! While in delirium,

I no longer know what I say,

And yet it’s necessary… make an effort!

You are a clown!

Put on your costume,

and they want to laugh.

And if Harlequin steals your Columbina,

laugh, clown, and everyone will applaud!

Turn your distress and tears into jokes,

your pain and sobbing into a grimace,

at your broken love!

Laugh at the grief

that poisons your heart!

Luciano Pavarotti (1935 – 2007) was an Italian operatic tenor who also crossed over into popular music, eventually becoming one of the most commercially successful tenors of all time.

Luciano Pavarotti made numerous recordings of complete operas and individual arias, gaining worldwide fame for the quality of his tone, and eventually established himself as one of the finest tenors of the 20th century, achieving the honorific title The King Of High C’s (from: wikipedia).

“Pagliacci” (literal translation: “Clowns”) is an Italian opera in a prologue and two acts, with music and libretto by Ruggero Leoncavallo.

Opera companies have frequently staged Pagliacci by Ruggero Leoncavallo with Cavalleria rusticana by Mascagni, a double bill known colloquially as ‘Cav and Pag‘. 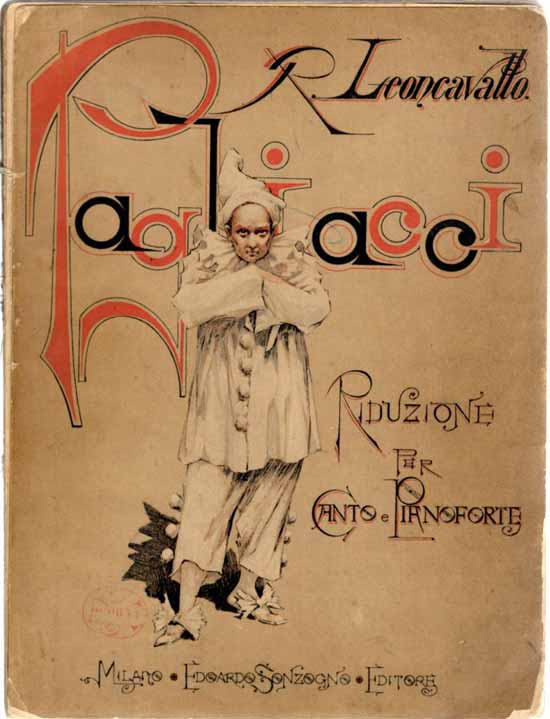 Cover of the original libretto of the opera “Pagliacci” (clowns).

We use cookies to make sure you can have the best experience on our site. If you continue to use this site we will assume that you are happy with it.Ok